THE WIND IS FREE
Where do you begin when you want to buy a boat? How did we go about buying our boat?

Mattis is from Ireland and is a traditional wooden boatbuilder by trade with a background in aeronautical engineering. Mattis worked in the Highlands of Scotland, building clinker sailing boats. After that, he worked in the north of Norway for a couple of years. From 2015 to 2017, Mattis worked at a slip in Plymouth, restoring classic wooden boats and building wooden dinghies.

Myself, known to most people as Mo, but my name is actually Merissa, am from Bedfordshire, UK. I studied BSc Biology at university and after I trained to become a therapy radiographer. I've worked as a therapy radiographer since 2010 and in 2016, I took a course in reflexology and qualified in 2017. When I met Mattis in 2015, I had never set foot on a yacht, let alone sailed one. At that time, neither of us had any experience with GRP boats.

When we decided to buy a boat, we researched different types of wooden and GRP (glass reinforced plastic) boats. We quickly came to the conclusion that, even though a wooden folk boat would have been amazing to sail, wooden boats would need a lot more maintenance and attention than fibreglass boats.

What were the main things we were looking for in a boat?
- A used fibreglass boat with proven seaworthiness
- A good hull with no osmosis, preferably not painted
- A decent engine

We weren't too concerned with standing rigging and sails because we would replace them and have exactly what we wanted for our trip.

We started looking at 30 to 32 foot fibreglass sloops, and the first boat we viewed was a Canadian-built Contessa 32. This boat had fantastic equipment, up to date rigging, modern winches and sails. We were interested straight away and put down a deposit to take the boat off the market, so we could have a survey done. Sadly, when the survey report came back, the surveyor was not convinced that this boat had the same quality and structural integrity as the British built Contessas. So we kept looking...

The next boat was a 'SHE'. The cockpit and saloon were in great condition. However, climbing back down we noticed two hairline cracks on the hull, running from the chainplates on deck down to the keel. It was probably caused by over-tensioning the rigging, but this meant that the hull would need a lot of work doing to make it safe at sea. We decided not to pursue this boat any further.

Contessas on the whole seem to cost a bit more than similar boats from the 1970's. However, we were happy to keep looking for one as Contessas have a brilliant reputation and are known to be extremely capable boats at sea.

We looked at three Contessa 32s, all around £25,000. All of them were very tired and needed work. 'Jingo' was one of the last Contessas we viewed, towards the end of January 2016. Jingo had by far the best looking hull and interior, a brand new Beta 20 engine (with only 30 hours logged) and new interior upholstery. The standing rigging was well past its best, and she came with original sails that were at least thirty five years old, so she suited us perfectly. Jingo hadn't been sailed very much for the last 3 years. She was put on the market for £26,000 in June 2015 and for some reason, we're not sure why, did not sell for 8 months. By January 2016, the owner had dropped the price to £19,500. It was love at first sight for myself and Mattis, so we made an offer of £15,000, subject to survey. The next morning we were told that the owner had accepted our offer.

There are many great books available when doing research, and some forums with really helpful people. Jeremy Rogers' yard, builders of the Contessa and Kit, Jeremy's son in particular are extremely helpful. Not to forget the class association at co32.org and the Contessa 32 Facebook Group. The class association website also has a number of PDFs on the most common repairs and upgrades. “Contessa 32 Health Check” is one we used. This gave us a good idea of problem areas to check before getting a survey.

The survey report contained a number of recommendations that, if we decided to go ahead with the sale, would need doing. There were no major structural problems, so the sale went through. Jingo was ours!

Structural work in GRP has so far proved manageable if you have the right materials and work methodically. Most people would do at least as good a job as a boatyard would, it just takes longer. Having said that, Mattis wouldn't have considered buying an old boat like a Contessa on a limited budget unless he was prepared and confident to do this kind of work.

After buying Jingo, we didn't really have a budget for getting the boat ready. We made a list, put rough figures next to each one and went from there. By the time we left Cornwall, we'd spent £20,000. But after each item we bought, we thought to ourselves there was no point in skimping on items that could save our lives. We didn't want to be at sea cursing at ourselves for not paying the extra few hundred pounds for a decent genoa, for example.

Looking back now if we did it again, if we had a budget in mind for what we wanted to spend on doing our boat up, I would say double that figure. Just to be on the safe side.

We love our Contessa, and we always feel like she will look after us at sea. 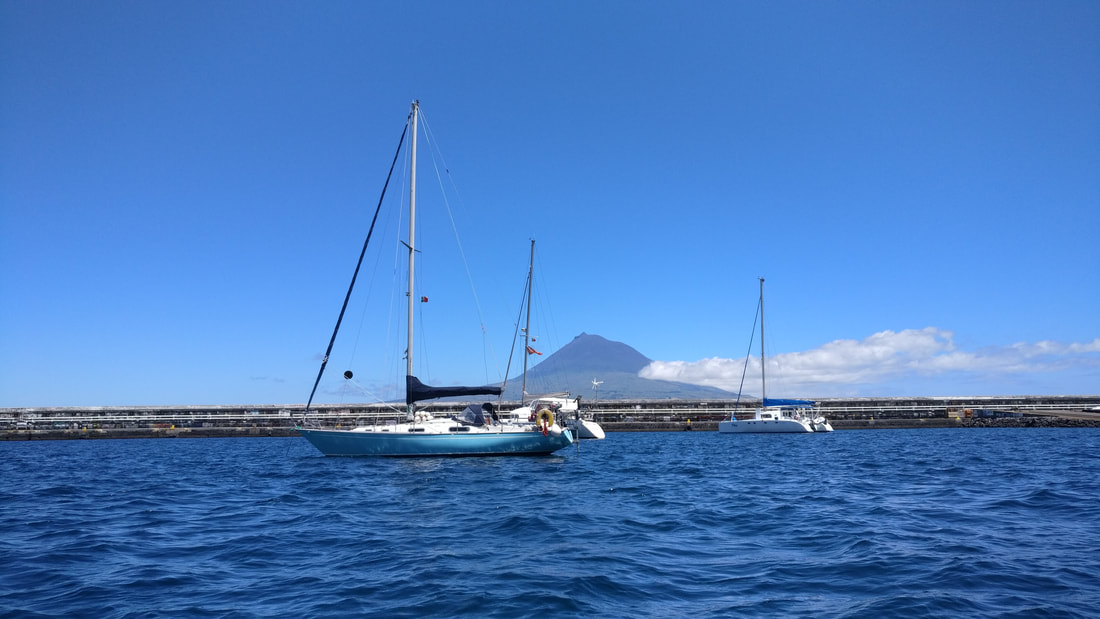